Today, the facility cleans an average of 26 million gallons of used water each day to among the highest safety and quality standards in the nation. Through advanced technology and processes, the Durham facility treats and removes valuable resources from water collected from homes and businesses. This water flows through a strategic process of liquids and solids recovery. The water is then returned to Washington County’s only river — the Tualatin. The returned water is so clean, it improves the river’s water quality.

Cleaned water is also used for local irrigation, and natural byproducts of the treatment process are converted to electricity and heat and used as soil amendments. Captured methane gas, a byproduct of anaerobic digestion, supplies electrical power for the facility. In 2009, Durham installed the first commercial nutrient recovery facility in the nation in partnership with Ostara Nutrient Recovery Technologies in Canada. The facility captures 80% of the phosphorus from the wastewater recycle stream and converts it into a premium, slow-release fertilizer used in agriculture and nurseries.

The Durham facility began operations in 1976 to reverse decades of severe water pollution in the Tualatin River and its tributaries, and to meet the demands of a growing population. This facility centralized a scattered system of inefficient wastewater treatment plants, creating one of the most efficient and advanced facilities in the world. 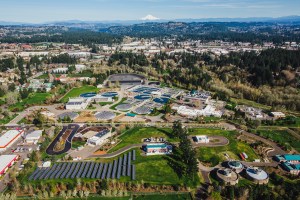 In 2016, Clean Water Services, Energy Trust of Oregon, and the Oregon Department of Energy dedicated a new cogeneration system that converts wastewater and food grease into clean, renewable energy. With this innovative system, the Durham Treatment Facility is the third water resource recovery plant in Oregon to co-digest fats, oils, and grease.

Durham had operated a 500-kilowatt cogeneration system since 1993 using biogas from treatment of the communities’ wastewater to offset its own energy usage. By replacing this smaller engine with two new engines, Durham now has a 1.7-megawatt cogeneration system fueled by biogas produced from the anaerobic digestion of municipal wastewater solids as well as fats, oils, and grease (FOG) collected from Washington County restaurants and others. FOG, also known as “brown grease,” is pumped out of restaurant grease traps and interceptors at regular intervals.

This is just one project where CWS and Energy Trust have teamed up to invest in projects that save and generate energy. Since 2004, CWS has worked with Energy Trust on more than 100 energy-saving improvements throughout its facilities — everything from large-scale capital improvements to new energy-efficient lighting, pumps, and drives and operations and maintenance improvements. This has resulted in more than 9 million kilowatt hours of electricity saved per year for Clean Water Services, and lower utility bills and operating costs translates to saving for ratepayers.